Always know when a customer or visitor enters your space with a 4,000 FOOT RANGE, commercial entrance alert.  Our most popular Motion Alarm Kit Designed for Businesses & Warehouses comes with 1 Motion Sensor and 1 Chime Receiver.  Simply mount the sensor over (or beside) the entrance to be monitored and plug in the chime receiver wherever you need to hear the notification.

Perfect for retail locations or offices to improve customer service and employee safety.  Add on additional sensors (ERA-PIR) to monitor multiple doors.  Plug-in additional chime receivers (ERA-DCRX, ERA-RXPG, & ERA-VPRX) to hear the chime in multiple locations – stock rooms, offices, and warehouses.  If you have an entrance where the door is usually closed, consider the ERA-UTDCR Warehouse & Business Wireless Doorbell Kit Designed for Business Use.  Never be caught off guard again. 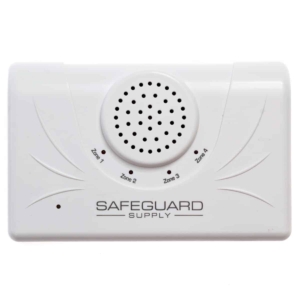 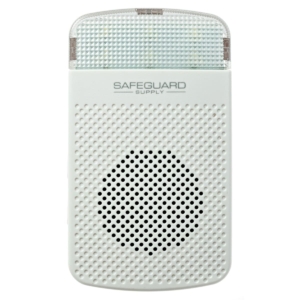 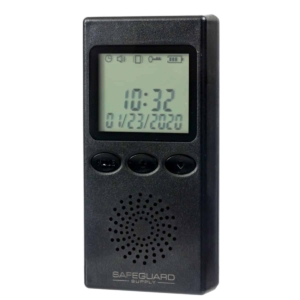 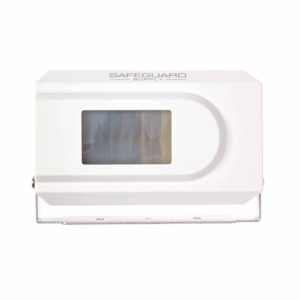 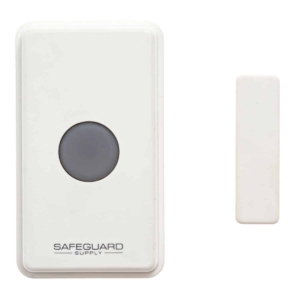 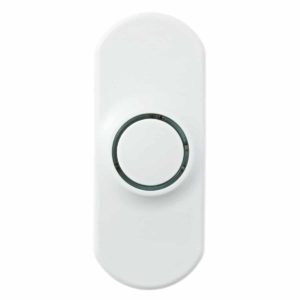 If you can’t seem to find a wireless entry alert that you can depend on, look no further than the ERA-PRDCR entrance alert kit by Safeguard Supply.  This kit features a Passive Infrared (PIR) sensor/transmitter (ERA-PIR) that’s activated when the combination of heat and movement is detected within the monitored zone with a desktop receiver.  The ERA-PRDCR is a Motion Alarm Kits Designed for Businesses & Warehouses.

This type of motion sensor door chime entrance alert is designed to monitor doorways where the door sometimes remains open, or to cover open areas such as hallways.  Although this product works extremely well over doorways that typically remained closed, you can also refer to its companion product, the ERA-UTDCR which features a magnetic door contact instead of the motion sensor featured in this kit.

How this Motion Alarm Kit Designed for Businesses & Warehouses Works:

When activated, the sensor transmits a wireless signal, up to 4,000 ft. away to the compatible ERA-DCRX or the ERA-RXPG (choose receiver) wireless receiver.   This kit includes 1 x ERA-PIR sensor/transmitter and 1 x ERA-DCRX receiver.

The Components of the Motion Alarm Kit

The sensor is a great choice to use over doors where you cannot mount an ERA door contact sensor or for doors that sometimes stay open, hallways, and more. It creates an invisible zone that triggers when the combination of heat & movement is detected.

The receiver (see below) will play a chime sound when it is triggered by the motion sensor. Up to 12 different sensors may be paired to each ERA-compatible receiver, with each sensor triggering the receiver to play a selected chime sound. There is no limit to the number of receivers that may be paired to a sensor/transmitter.

Each ERA-DCRX receiver has four zones, with each zone having the capability of pairing with 3 sensors/transmitters (meaning the receiver can work with up to 12 different sensors/transmitters).   When triggered, each zone will play 1 of 12 melodies you assign to the zone so you can easily distinguish which sensor was activated.  For example, you may program zone 1, the front door, to play a simple ding-dong sound, while zone 2 plays the Westminster Chime sound.

The receiver features a volume control button that allows you to turn the unit off, mute the unit, and set it to four different sound levels, with a max sound of approximately 85 dB.  In addition, each zone on the receiver features a live 12V DC output that allows you to add sirens, strobes, fire alarm bells, and buzzers to increase the sound and/or bright visual indicators when the listening area is loud.

For complete kits with strobe lights, please visit the WDK-ERA-STROBE, or, for kits that feature external sound options, visit the WDK-ERA-KIT product pages. The sensor/transmitter in this kit is the ERA-PIR, a motion-activated sensor.  The idea behind this sensor is to mount it over an area you would like to monitor such as a doorway, hallway, or another area.

Features of this Motion Based Chime Kit:

How & Where to Mount the Motion Sensor:

First, mount the included aluminum bracket on the wall above the area you would like to monitor.  Next, slide the sensor into the bracket with screws on the end of the sensor fitting into the open end of the bracket.

Next, manipulate the sensor angle to create the monitored zone needed in your situation. Finally, tighten the screws.

The size of the monitored zone is dictated by the height the sensor is mounted.  The higher it is mounted, the wider the zone.  The sensor was specifically designed to have a narrow depth to help limit the invisible beam bleeding into areas you do not intend to monitor.   The table below provides an approximation of the zone created based on the mounting height.

Hear the Available Sounds of the ERA-DCRX