The DSTX is a PIR based driveway alarm sensor that will transmit a wireless signal up to 1,000 ft. to the compatible LRA-DCRX receiver. Outdoor rated, this is an affordable sensor great for long distances. 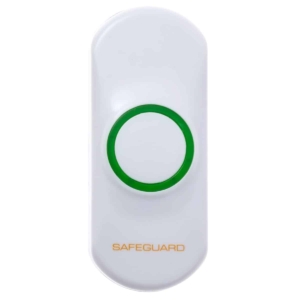 The LRA-DSTX is a Passive Infrared (PIR) sensor based transmitter designed to work with the LRA-DCRX Chime Receiver and the LRA-VPRX Portable Chime Receiver by Safeguard Supply.   This is a outdoor rated sensor that will transmit a wireless signal up to 1,000 ft. to the receiver.  When the combination of heat and movement are detected within the detection zone, the transmitter sends an instant alert to the receiver.

Like all Safeguard Supply products in the LRA series, this transmitter may be mixed and matched with other transmitters and receivers to fit your business or home monitoring needs.

I bought this door bell for my brother who is very hard of hearing even with hearing aids. He is able to hear the chime and the flashing strobe light will be a great benefit as well.

r
r.b. (Lancaster, US)
Best bell out there for the price

Works great for application using it for.....the light is bright and the fact u plug into standard outlet with battery only in button thanks

I ordered what was advertised as a wired doorbell extender system (battery operated wireless transmitter which is hardwired to the doorbell chime, and a wireless receiver which plugs into an AC wall outlet) from Amazon. Unfortunately, the plugin receiver was shipped without the wireless transmitter. A phone number was included with the instructions in case of difficulty, so I called and explained that the transmitter was missing. A transmitter was shipped that day, and arrived today. Following the instructions, I installed and paired the transmitter and receiver in about 20 minutes. There was one minor glitch; the instructions say to connect the red wire to the front doorbell terminal, the black wire to the rear door doorbell terminal, and the black wire to the transformer terminal. The three wires are red, white, and black. I concluded (correctly) that the white wire was for the rear doorbell terminal since there were not two black wires. I can now hear the remote receiver chime in my back bedroom when someone rings my doorbell. It works perfectly.

This adapter saved me from constantly having to buy 3 C cell batteries. My Dad gets a lot of visitors and the receiver is on te loudest setting with flashing strobe lights. This setting eats those batteries but the AC adapter pays for itself!

You've just added this product to the cart: