The History of the Doorbell

The History of the Doorbell

“Spanish Customs Door Bell Crank” by Infrogmation of New Orleans is licensed under CC BY 2.0[/caption]

Plain old knocking was and still is, a fairly good basic method for announcing your arrival. The major flaw is that people inside may not hear you when you knock, so manual or mechanical doorbells were devised. The simplest pre-electricity example of a “visitor-announcement system” was the door knocker, in use since ancient times. These older-version door-sill or door-mounted devices made a sound when the visitor banged the hinged knocker onto the metal plate installed under it, protecting the door. These door knockers also served as decoration, but they worked little better than knocking, being only somewhat louder.

Vintage styles then took a step forward from knockers; to better alert people indoors to a visitor. Mechanical chimes were made using a small bell, installed inside the house that was manually activated when a visitor would pull a chain or string to ring the bell. This bell is the same design as the “servants’ bells” you see in period films from the late 1800s. In this setup, a bell rings in the maid’s quarters when someone, far away, in one of the rooms of the main home pulls a chain to summon them.
Another early Victorian era doorbell design used a twist handle–like turning a key. When the visitor turned the handle, it caused a tiny hammer or clapper to strike a bell on the inside of the door. A rapid trill or ringing sound was produced. These relatively crude mechanical bells were loaded with charm and sometimes “ye olde” doorbell featured very ornate outdoor buttons, pulls or levers. Retail stores and small shops often used door-mounted mechanical bells to announce when a customer entered a shop. A version of these is still in use today.

Who invented the doorbell? Was there a “not-so-famous” Alexander Graham Doorbell hidden somewhere back in ancient history? We can thank a scientist and the first secretary of the

Smithsonian Institution, Joseph Henry, for inventing the electric doorbell back in 1831.
In the early 1900s, expensive batteries were replaced by transformers, allowing the use of a household current. Until the early 1930s, most doorbells were loud electric buzzers. Musical chimes with pleasing tones became popular in the 30s. The Depression and WWII quieted development, which surged again in popularity during the 1950s. In the mid-1960s, decorative and multifunctional door chimes became more popular. They were built with clocks atop the chimes and decorative plaques hiding indoor components.

Hard-wired electric doorbell components include the outdoor button, wiring, transformer and chime or bell. The electric chime functions when the button, outside the home, is pushed, causing electrical current to flow into a transformer. The transformer takes the electrical energy from the circuit/source and transforms it to the lower voltage needed to power the door chime inside. The current activates a chime or some sound signal. The doorbell’s sound may come from a buzzer or a bell instead of a chime.

Wireless doorbell systems are incredibly popular due to ease of installation. With no wiring along baseboards or inside walls, wireless receivers can be plugged in a wall socket (using a small transformer adapter) or battery powered. The transmitter is the button, which is commonly battery operated, using long-lasting lithium batteries.
When a visitor pushes the button, it transmits a radio signal to the receiver(s) inside the house. The signal activates a sound chip in the receiver to play the sound through a speaker. To avoid interference from wireless devices on the same frequency, several different radio channel options are available.

Design variety: Match any decor, or use sleek, functional units that blend into basic white or beige walls. You can find doorbell buttons with personality and style too.
Chimes and tunes: If you don’t want to listen to the same sound every day, enjoy the variety of a variety of tunes, multiple sound effects, and melodies. Some doorbells offer eight different tones, notes and songs and others offer 13 sound options, some offer only 2 or 3 basics–and there’s even a model that offers 50 songs.
Extended range: For long-range capability you can purchase units with a range up to 1000 feet. There are innovative doorbell extenders that can extend the range of your existing unit so that it is audible where you need it.
Safety: Get advance notice of someone coming up the driveway–being alerted much earlier –with a wireless driveway alarm with a motion sensor. Motion sensors are compatible with many systems as well.
Visual signals: Some doorbells or door alarms these days also feature visual signals like a blinking light for loud areas or as an aid to the deaf or hearing impaired.

The advent of wireless and multi-featured doorbells has brought a resurgence of popularity to the wired doorbell. Both wireless and hard-wired systems have begun offering a broad range of tones, melodies, songs and sound effects. These options allow homeowners and businesses to customize the look — and also the sound — of their entryway. Decorative motifs for the indoor receiver/speaker unit vary from architectural designs, contemporary, sophisticated, streamlined, polished wood, brushed-metal, hand-crafted wood styles, antique-look scrolled designs and more.
Most systems have at least a few basic chime options, for instance, a basic “ding dong” sound and other deep or high bell-like sounds; in single notes or groups of 3 or 4 tones. Deep tones can sound serious, elegant, rich or ominous; similar to a large bell-tower bell. Higher chimes mimic the high, clear notes you might get from tapping on a crystal wineglass.

If you’re looking to go beyond the basic, classic door chime sounds–now that is possible. Choose musical doorbells that can greet visitors with a holiday theme, including Halloween songs, Christmas tunes, New Years, 4th of July and more. Some offer as many sound choices as the proverbial jukebox.
If you’re thinking about adding, replacing or upgrading your current system today, browse the online catalog at 1800Doorbell for a wide selection. We offer the best brands and models available in the latest designs. Here you’ll find full-featured wireless doorbells, driveway alarms and more. We also offer realistic vintage designs to add character to your space. Contact 1800Doorbell.com for more product information and for assistance choosing the right one for your home or business. Contact us today!

Give Me the Bottom Line: Long Range Doorbell Reviews

Get Creative! The Most Interesting Doorbell Ideas…Ever 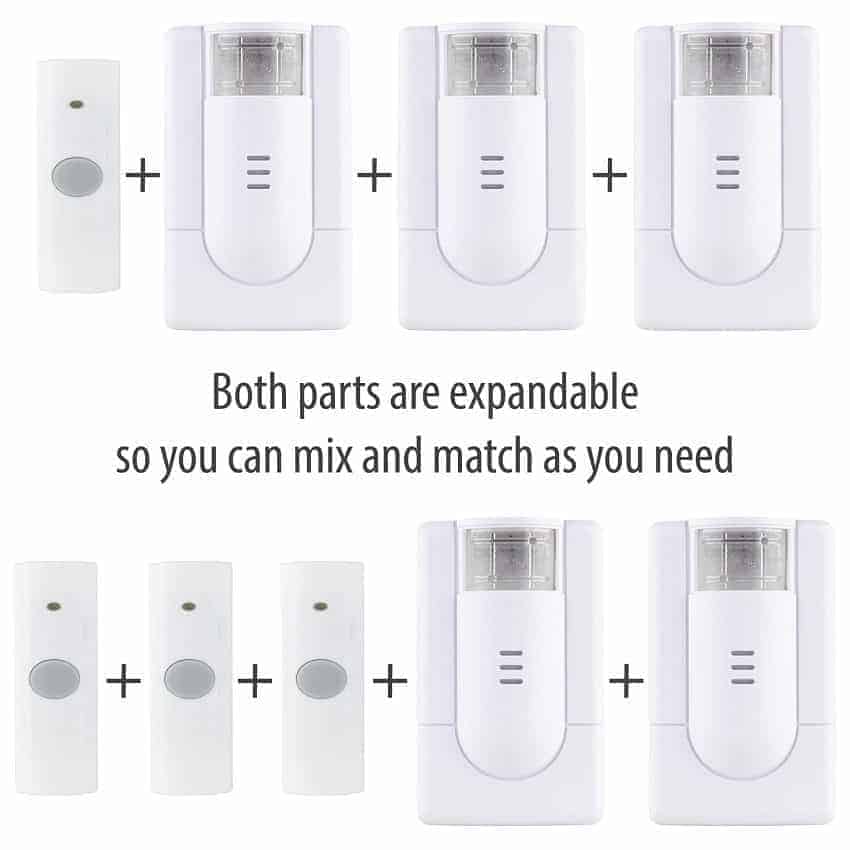 The 20 Most Ridiculous Redneck Doorbells