The DH1605 is a no frills, wired doorbell push button.  Non lighted black center push enclosed by a round,  polished brass circle. 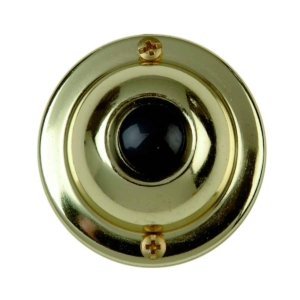 Make every entrance a grand one with this Simple Round Brass Non Lighted Doorbell Button. The DH1605 Doorbell from Thomas and Betts is a stylish wired doorbell button that’s sure to make a statement in any home. It features a polished brass base and a sleek looking black button, giving this doorbell the ultimate look of elegance. Easy to install with a new or existing wired doorbell system.

Please note that this doorbell is for use with wired systems only; for wireless systems, be sure to shop our collection of wireless doorbells.

Doorbell was exactly as ordered and delivered very timely (twice - see below), and it works. One hiccup. When I received the first delivery and sought to test it (including having my local hardware store put it on a current tester) before final securing of wires and installation, it appeared not to work. I notified customer service, and was advised that a replacement would be sent, without the need for returning the first one. The second one arrived promptly, but upon testing again appeared not to work. Puzzled, I then pried thing apart to investigate, and discovered that because of the construction, any test that does not tighten the contact screws completely or mostly completely, will make it appear that the button does not work. I suggest perhaps put something in the box that makes this clear. Now, of course, I have two working gizmos, one installed and one extra that I do not need. Can I somehow use the promised delivery coupon to return the extra one to you?

I have not hooked up the button yet but it looks very nice and classic, the brightness of the brass ring makes the black button very visible, no need for a light-up button here

R
R.P. (San Diego, US)
The Little Doorbell That Works

Small, classy brass, easy to install and it works.

Always quick shipment when I order!